WHERE YOU HAPPEN TO BE (Deerbrook Editions, 2018)

With variously sized poetic scopes, ever focused, Leonore Hildebrandt finds us connective paths through space and time, delineating the material and spiritual dimensions of shelter. Where You Happen to Be takes its cue—and title—from Buckminster Fuller’s directive: “The most important thing to teach your children is that the sun does not rise and set. It is the Earth that revolves around the sun. Then teach them the concepts of North, South, East and West, and that they relate to where they happen to be on the planet’s surface at that time.” A poet of the keenest relational reasoning, Hildebrandt marks out the directions of a nostos poetics, venturing, but never claiming, the way home. Her precision of image and tone is all the more indelible for this concomitant spirit of wandering. This is a book you read in one fascinated swoop, then return to again and again with love and gratitude. There are so few books of contemporary poetry contributing to what I’d call a “wisdom tradition.” This is most certainly one of them.
––SARAH GRIDLEY

The reigning intelligence in Leonore Hildebrandt’s Where You Happen to Be is a wanderer over physical, political, and spiritual landscapes. Intensely observant, ever aware of the contingency of her present circumstances, Hildebrandt carries the reader from the Maine coast, where “the ocean was right in its fervor” to the arid hills of northern New Mexico, their “desert patina . . . chiseled” with petroglyphs; from ominous urban ruins to the great, dark forests of fairy tales and the unconscious. Do not come to these poems looking for peaceful resolution; this poet is too busy with the work of being “unconstructed / uncontrolled / unstoppable.” But do come to these poems.
––LEE SHARKEY

In Where You Happen to Be, Leonore Hildebrandt writes of “discern[ing] layers / of sound and scent,” of probing “the human dilemma / of purpose and failure.” The poems in this collection assume this task of recognition and discovery. Gently, and with a great and detailed patience, she walks us through physical and emotional landscapes, narrating travels that feel both in and out of time. “The living,” Hildebrandt writes, “inherit the world’s blindness— / so much of it, they get blissfully drunk.” Yet as her poems celebrate and mourn our blindness, they also remind us, again and again, of the power of resilience: “Let one lake rest on another.”
--DAWN POTTER 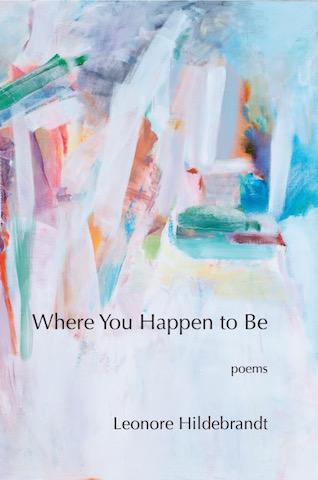 The title of this collection comes from a quotation by Buckminster Fuller, the genius who invented the geodesic dome. In his lifetime, Fuller was awarded 25 patents, wrote 28 books, received 47 honorary doctorates, and was such a globe-hopper that, legend has it, he wore four watches at once, each adjusted to a different time zone. In his final televised interview he said, “The most important thing to teach your children is that the sun does not rise and set. It is the Earth that revolves around it. Then teach them the concepts of north, south, east and west, and that they relate to where you happen to be on the planet’s surface. Everything else will follow.”

If the poet Leonore Hildebrandt wanted a model of an inquiring, roving, persistent mind, she couldn’t have chosen better. Her poems roam the hills of New Mexico, the Maine coastline, urban chaos-scapes, and fairy tale forests. All the while, Hildebrandt’s unerring sense of rhythm and musicality (she’s a musician, too) gives the poems a flow and spring that’s sometimes close to jazz and sometimes as formal as a sonnet.

Her themes are rich and her sources eclectic. “Thinking Potatoes” brings to mind the earthiness of Van Gogh’s The Potato Eaters but the piling up of image upon image recalls Sylvia Plath. In other poems, there are echoes of Pablo Neruda and Elizabeth Bishop, Emily Dickinson and Theodore Roethke.

Hildebrandt re-imagines stories of all kinds – fairy tales, Greek myths, the Arabian Nights, and nursery rhymes: Old Macdonald and Sing a Song of Sixpence. She disrupts these by appending contemporary trappings: Old Macdonald sprays weed-killing toxins onto his farmland; the maid who gets her nose pecked off in Sing a Song of Sixpence “was not stabbed, not shot in the face.”

If disruption is a theme here, several of the strongest poems register disquiet at the way we treat living things. War, ecological destruction, the careless descent into brutality – all of these are referenced in the collection. In “Sand Hour Sand,” she quotes a line, attributed to Geronimo, which is found on a grave marker: “Nothing survives except the rock.”

It’s sometimes said that a writer needs both binoculars and a microscope, the former to see the long view, the latter to find essential details. Hildebrandt has both in her armory and she uses them to create gorgeous poems that make you consider “where you happen to be.” Buckminster Fuller would have approved.

Deerbrook Editions in Cumberland brought out Leonore Hildebrandt’s third book, “Where You Happen to Be.” The Harrington resident is quietly one of Maine’s most meticulous writers, as evidenced in “The Next Unknown” and “The Work at Hand.”

THE SIGHTS FROM BELOW

Rulers have their praises set in stone––
monuments command the public square,
so the things we have always known
guide our vision.

The Shelter, a collaboration with painter Heidi Daub. The publication by the Split Rock Review features Heidi’s paintings, which Leonore's writing responds to, along with a recording.