“The past is treacherous,” Leonore Hildebrandt says in one of her fine poems haunted by history, hinting at war, imminent danger, the need to protect the vulnerable.  She also asks, “How do I choose my story without inventing?”  And her answer comes in poems that evoke more than they declare, question and suggest more than they assume.  The Next Unknown is a book full of smart, rich, elusive and formally elegant poems, drawn from the past and addressing the present, making it from one margin to another “via lines of color,” as she says in another poem, while “leaving spaces, at the end, for air.”
Betsy Sholl

Leonore Hildebrandt calls her book The Next Unknown as though her book's title should really be an after-title, could really be instantly a known state of metaphysical complication sometimes called the unknown.  Her poems are clear arguments that spring from and attach to one another; they pull apart and piece together in new, previously unknown, combinations.  This is a carefully made, generous book that never forgets someone is reading it.  A poem says: “...is nothing asserting itself, insisting/not to be lost?  And you and I, watching?”

Poetry that sees into the life of things, the freedom with which they swerve, their moral and mortal grandeur, how wonderfully they fall.  The integrity is dazzling. 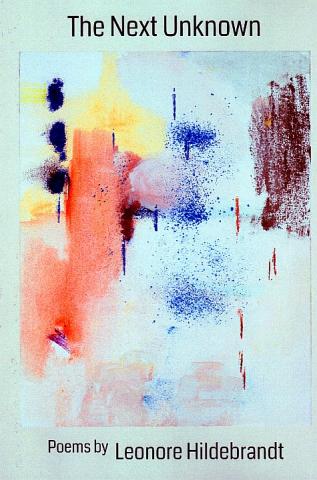 When asked to take a stance, the word straightens,
feet braced apart, elbows jutting. Clears its throat
to field questions: Is it still the same?

A man has come down the embankment. He enters the house, heaves himself up the stairs as if drunk.

I grew up in the Nachkriegszeit.
Like seedlings defying
broken soil, we learned to observe
the happy occasions, our birthdays.

The past was treacherous –
our burned city, the rubble
dumped into moats and covered
for wider roads – lessons ravaged
by new routines.

OFF RADAR: “THE NEXT UNKNOWN," REVIEW BY DANA WILDE

Quick note on Leonore Hildebrandt’s poetry: There is nothing quick about it.

Instead, there are what you might call intensities of diction that draw you into deep explorations of emotion. What kind of emotions? Well, the quick answer is: the emotions of everyday experience. But not the breezy, fleeting notice of a calm bay or sudden feelings on looking at old family photos. Instead, she drills into much deeper, more complicated places. Then she teases out the findings in compressed, unexpected language.